raven + crow studio is a Brooklyn-born, Los-Angeles-based creative agency that specializes in not being jerks.

We like to say we make the world a prettier place in two ways—first, by being good at our job, creating beautiful, effective designs that grab an audience’s attention and communicate our clients’ goals. The second way is making an effort to work with clients who we think are actively making the world a better place. We enjoy partnering with non-profits that work in the environmental realm, sanctuaries that rescue mistreated animals, human rights groups, vegan-based businesses, and locally run, responsibly minded ventures. We love what we do day-to-day, but what keeps us going is knowing that we’re doing it all for a greater good.

In addition to running raven + crow studio, founders + principals Katie Frichtel + Troy Farmer also act as Creative Directors for MooShoes Los Angeles, the first (and only) extension of New York City-based vegan shoe store, MooShoes. They helped to secure the brick-and-mortar location for the store, designed the space, worked with contractors to fulfill their vision of it, hired staff, and continue to choose lines + products while driving the creative brand of the store and planning vegan-centric events for the community in the space. 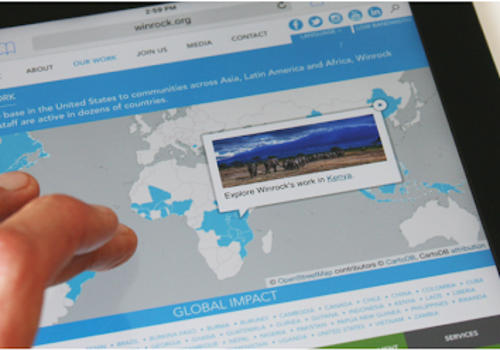 Winrock needed an updated website which also included a brand refresh and new logo. Features of the new site included mobile responsive design, interactive world map, and multi-language translation functionality. The result was a clean, versatile website that made a larger impact on their target audience.

For over a decade, raven + crow studio has provided branding and marketing collateral. They developed the website and have made subsequent updates, as needed. They also developed the logo and refined the brand.

raven + crow studio is responsive and communicates well, quickly answering any questions or concerns. They take feedback seriously and closely collaborate with the internal team to provide the best services possible.

I’m one of the owners of MooShoes, a vegan-owned business that sells an assortment of cruelty-free footwear, bags, t-shirts, wallets, books, and other accessories.

What challenge were you trying to address with raven + crow studio?

We’d been open for a few years and didn’t have a consistent logo or identity. We needed a partner to help solidify our brand.

raven + crow studio has been a long-time partner who’s worked on our ads, promotions, and website. They built our website when we first partnered and have made numerous updates. We initially hired them to work on a few advertisements, and the partnership has expanded since then. They created our logo and integrated it into our branding.

What is the team composition?

We work with two people.

How did you come to work with raven + crow studio?

A friend referred them. We shared a lot of ethics and personality traits, so we hired them.

How much have you invested with them?

We’ve been partners since 2003, and the work is ongoing.

How did raven + crow studio perform from a project management standpoint?

We talk weekly, if not more. They respond quickly, and we mainly communicate via email and text.

They listen to what we say and take our input seriously. We’ve worked with designers in the past who couldn’t accept criticism or didn’t want to have an open dialogue. raven + crow studio also pushes back on our ideas, if needed, to make them as good as possible.

They could better balance the functionality and aesthetics of the site.

Do you have any advice for future clients of theirs?

Give them as much information as possible. The more details you provide, the better they'll be able to meet your needs. Work with them if you want a close partner.

"They were unflappable, good-natured, and open to the challenging demands we placed on them."

While under the strain of strict deadlines, raven + crow studio coordinated a brand refresh and a WordPress website development for an economic development organization.

"They were unflappable, good-natured, and open to the challenging demands we placed on them."

raven + crow studio delivered a brilliant website, turning what once was an outdated reflection of the organization into a point of pride. The team worked well despite strict deadlines and offered innovative and practical solutions. Their professionalism never wanes, making them an ideal partner.

What challenge were you trying to address with raven + crow studio?

We needed to refresh our brand and create a new website using WordPress.

They advised us that the brand refresh should precede the website project. Our branding was out of date, but some elements needed to remain consistent. raven + crow studio presented us with a range of options from radical reinterpretations to subtler variations. We ended up selecting a theme in the middle that has turned out to be very popular.

They moved seamlessly into the site design, which was somewhat complicated, and the site launched promptly. It continues to be a point of pride for the organization.

The website was completed in May 2016, but we also maintain a contract with them for freelance design needs, which are available to the rest of our organization both domestically and internationally. They receive various jobs from us throughout the year.

What is the team composition?

I worked with the principal and creative director on the design side, in addition to a programmer. Their team had other members as well, but they made it very easy to have a single point of contact for each of the two significant elements of the project.

How did you come to work with raven + crow studio?

We held a Q&A session with every firm interested in bidding. We answered all questions from potential bidders at the same time in the interest of fairness. We had an internal discussion of all of the proposals we received, and raven + crow studio was a finalist. We had a large group interview each finalist. We then held an internal vote, which raven + crow studio won based off of their bid, pricing, and personality. We were confident they had a high standard, and we trusted them to deliver something we would be excited about.

We started working together in July 2015, and the work is ongoing.

When I started here, people would complain bitterly about our site. That is now a thing of the past because of our new site. Outside partners and funders often remark on the site being impressive and helpful to find what they need. We can tell that we are taken more seriously because of the new site. They turned a paint point into a source of pride for the entire organization.

We have a new board member who commented that our site was one of the reasons they became part of the organization. They liked showing it off to others. The positive reinforcement is unceasing.

How did raven + crow studio perform from a project management standpoint?

They’re consummate professionals. They’re innovative and pragmatic. They have an extremely good mix of teachable and intuitive skills that make them unique.

Several aspects of this project had to be expedited given time sensitivities. They worked very well under pressure. They were unflappable, good-natured, and open to the challenging demands we placed on them. They delivered high-quality work in a very short period.

They nailed the work. They’re timely and talented. They gave us winners every time.

When they have a heavy client workload, they sometimes struggle to balance all of their responsibilities. They never left us hanging in any way, but sometimes we had to wait our turn to have a morning call with them because it’s a small firm. I’m generally very pleased with them—this is sometimes the reality of working with a boutique firm.

Do you have any advice for potential customers?

Take their guidance seriously and give them as much time as you can because the quality of the product will only increase. We were rushed at times, and they delivered strong work under those deadlines. Even if you’re in a rush, they’ll still do great.

5.0
Overall Score It’s been an outstanding experience working with them.